Dive Report
Flat seas and clearing water with that blue hue is finally here. A little breeze from the north west for the past couple of days but it’s still been very diveable, particularly on the ex HMAS Brisbane.
As the wind eased off today (Saturday) the seas flattened out once again and look like holding for tomorrow. The Inner Gneerings has produced water of 15-18m viz.

3 Grey nurse sharks have been sighted a little further out on the Gneerings which is great to see. This is the 3rd winter that we’ve seen them now, let’s hope it continues. Water temperature is still on 18C but when the days are so warm and the seas are so flat and the water so blue, the temp doesn’t matter any more.

Our group out on Big Cat Reality this weekend should get in some great diving in these conditions.
The BOM forecast is a little off again unfortunately.
Tony is back from Borneo and from all reports it looks like a sure thing for an overseas trip next year.

Our sympathy to Murray and all at South West Dive Centre after the unfortunate dive cylinder explosion last Sunday. Although all correct procedures had been followed and the cylinder was in test, the cylinder exploded while being filled taking off Murray’s right hand and severely mutilating his foot. Doctors are fighting to save his leg at the moment.
I haven’t had details confirmed at this point but as I understand it, this cylinder is of 1983 vintage and of the suspect 6351 alloy that has been the subject of many a debate over past years. These cylinders just won’t go away and authourities will not withdraw them from service. There are warnings issued buy Q.W.H & S.but that doesn’t stop them from exploding and severely damaging or maybe even killing someone, usually the person filling the cylinder.
Some debate has already surfaced and I am just amazed at how little value some divers put on someone’s life or well being for the sake of a cylinder that is 20 odd years old and probably cost them only a couple of hundred dollars.

Dive Report
The weekend is shaping up to be a beauty.
The seas have been flat with not much swell. The south westerlies have helped flatten the sea that’s for sure.

The water is still a little ‘chilly’ for us Queenslanders at 18C and visibility has hovered around 8-12 metres.
There was a layer of about 20+metre viz today on the HMAS BRISBANE. This was at about the 5 metre mark. You could see both funnels quite clearly. They are 20 metres apart.

Marine life on the HMAS BRISBANE is still prolific and there are heaps of colourful hard and soft corals taking hold now too. It is becoming a macro photographer’s paradise as well now.
Conditions look great for the night dive this Saturday. Will let you all know how this goes down.

Just arrived in our dive shop is the new Oceanic OC1 air integrated dive computer complete with precision digital compass.
Come in and check it out.

Tony is over in Borneo this week and next doing some recon on where we hope to be running our major overseas trip next year. (Pity about the typhoon over that way at the moment isn’t it?)

Dive Report;
What fantastic weather, and it continues!!!
The sea conditions and dive conditions have been just perfect.

The water has been a bit chilly, 16C on the EX-HMAS Brisbane which is the coldest I can ever remember. The seas have been flat and visibility has hovered between 10-15 metres. The life on the wreck is just astounding.
Great news to see someone has actually been pinged for fishing on the wreck. We’ve some photos passed on to us of another boat fishing over the HMAS BRISBANE which we will forward on to the authorities to deal with. Hopefully the message will get out there that the wreck is a no go no fishing site. It can only house a certain amount of marine life and the excess will spill over to neighbouring reefs, if only it’s given a chance for that to happen.

The 4th year anniversary passing by was a good opportunity for the Federal member for Fisher the Hon. Peter Slipper MP to sound his intentions regarding the HMAS Tobruk. He sees it as the right time to put our hand up to register interest in getting a second wreck to dive on. This would make the Sunshine Coast “THE” place to come to dive. With the colour and life that is accumulating on the HMAS BRISBANE, it would surely rank the area as a must, must do area for all travelling divers.

Tony returned from their overseas diving trip on Palau with all the troops and it sounds like they had a ball. Quality diving, good food and great company all went together to make the trip a real success. He’s off to test the waters of Borneo and Kapalai Resort on Tuesday with the view to be heading there with a dive group next year. Watch this space!!!

Dive Report;
Another week of flat seas and clear water???? “I think it amazing!!!”
Has our winter weather finally sorted itself out.

This is what we so often talk about as standard winter dive weather and it’s good to see it seems to be here to stay. The weather pattern for the week is looking very encouraging. Visibility was in the 15-20 metre range on the HMAS BRISBANE and also 10-15 metre on the Inner Gneerings. Divers are reporting hearing whale songs on just about every dive. The marine life on the HMAS BRISBANE is still superb in spite of the continued efforts of a band of illegal fisherman. Believe me, there are species there worth having a look at. Soft and hard corals are certainly establishing themselves on the site as well. It is proving to be a very colourful dive if you take an underwater light with you. 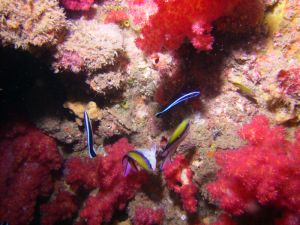 20 of our troops have headed for Palau under the guidance of Tony and are currently enjoying the exciting diving on offer up there right at this minute. I have heard that they have had sightings of Manta Rays and even a Tiger shark while diving yesterday. They will have some stories to tell on their return.
This Saturday evening sees renowned photo journalist Nigel Marsh and Helen Rose join us for a digital photography information feast. The dive locations that this duo have visited and photographed has to be seen to be believed. This session is free to club members but is also open to non club members for a nominal charge. Bookings are essential.