Dive Report;
Another week of flat seas and clear water???? “I think it amazing!!!”
Has our winter weather finally sorted itself out.

This is what we so often talk about as standard winter dive weather and it’s good to see it seems to be here to stay. The weather pattern for the week is looking very encouraging. Visibility was in the 15-20 metre range on the HMAS BRISBANE and also 10-15 metre on the Inner Gneerings. Divers are reporting hearing whale songs on just about every dive. The marine life on the HMAS BRISBANE is still superb in spite of the continued efforts of a band of illegal fisherman. Believe me, there are species there worth having a look at. Soft and hard corals are certainly establishing themselves on the site as well. It is proving to be a very colourful dive if you take an underwater light with you.

20 of our troops have headed for Palau under the guidance of Tony and are currently enjoying the exciting diving on offer up there right at this minute. I have heard that they have had sightings of Manta Rays and even a Tiger shark while diving yesterday. They will have some stories to tell on their return.
This Saturday evening sees renowned photo journalist Nigel Marsh and Helen Rose join us for a digital photography information feast. The dive locations that this duo have visited and photographed has to be seen to be believed. This session is free to club members but is also open to non club members for a nominal charge. Bookings are essential.

Dive Report;
Well, FINALLY!!!, we are experiencing some of our traditional winter diving weather. The seas are flat and the water is a comfortable 19C.

Visibility is on the improve too with 8-10 metres reported yesterday. The marine life on the HMAS BRISBANE is still very prolific but we are finding heaps of fishing line, hooks and even an anchor on the ship. Numbers of King Fish are down, probably due to the fishermen who blatantly flaunt the rules and fish in a NO FISH zone, and don't care. There are heaps of other fish species that make up for the short fall of Kingies though. The HMAS BRISBANE has not lost any of it's charm and is still getting rave reports from all divers who visit her. I am mystified why we are not seeing patrols to the BRISBANE in an effort to stamp out the illegal fishing. There was a huge high for all the divers on board yesterday. 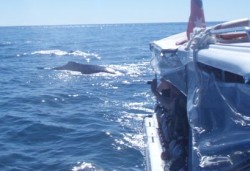 They could hear the whales while on the dive and there were 2 whales that passed right over the top of the HMAS BRISBANE. Then to cap it all off, they had a whale 'encounter' on the way back to port with whales coming up to within 5 metres of the boat. The troops were stoked.