WOW!!! What a winter we've had with great visibility and it is still hanging in there with a good 20 metres viz over the weekend and 25 metres today.

Matt saw and filmed 10 huge Qld Grouper on Friday and today there were 6 just hanging about. The big Bull Ray is back as is Mertle the turtle. She just loves divers and isn't fazed by them at all. A couple of Eagle Rays along with the Jewies and Kingies etc etc were all there and of course don't forget the fishing tackle, some of it still had bait attached.

Entertainment during the surface interval was whales and whales and more whales with one passing very close to the dive boat and would have swum right over the bow of the HMAS BRISBANE. Divers had to sit it out as they still had more surface time to wait before gearing up for their second dive. On the way back to port just as they were passing "The Caves" on the Inner Gneerings, another whale show. What a day they had and there was no swell as we mentioned to a number who phoned up concerned about the big swell mentioned in the media weather reports.

Pics on facebook will prove the point, there was no swell here on the Sunny Coast.
Check out some of Ian Banks' recent footage of the HMAS BRISBANE:

A grey Nurse shark one day, a Sun Fish the next and then on Friday a whale swims right in front of a group of our divers at the bow of the 'big' ship. It doesn't get much better than that.

Needless to say that they were all gibbering on about this great experience when they returned from another great couple of dives on the HMAS BRISBANE. The first signs of 'whale action' was when a couple came right up to our dive boat and swam around it twice. They then headed over to the wreck and did a swim past the bow. Only one was seen underwater by the divers but that was enough to make their day. The 7 large Queensland Grouper they saw seemed to pale into insignificance after seeing the whale.

Water temp was sitting on 20C and visibility was 20-25 metres and that was with a bit of a stiff northerly blowing. Visibility has been good on the Gneering Shoals as well with reports of between 10 and 20 metres at different locations.

The dive conditions look like being fantastic for this weekend and through next week with virtually no swell and a bit of wind from the western sector. If you haven't made the effort to get out for a dive during winter then, don't miss some of the best conditions we've had for some time. As spring is already here, conditions won't last like this for ever.

What fantastic diving weather we’ve had.

The seas couldn’t be any calmer and the water has been just brilliant with 20 metres plus viz on the HMAS BRISBANE and 15 metres viz on the Gneerings and at Mudjimba Island. Water temp is on 20C.

Not really winter temps. Once again, divers have continued to be blown away by the marine life on the HMAS BRISBANE and even the life on the Gneerings has seen an improvement. A grey nurse shark was sighted on the Gneerings again which is always a buzz. Conditions look like holding all week with many be a bit of northerly puffing up on Sunday.

If you haven’t ventured out over the winter, it may be advisable to get out soon before these great conditions change.

Tony and the 15 other divers are due back from Borneo tomorrow. Can’t wait to hear the reports on diving Sipadan.
Check the trips page for details on Truk and Tonga next year. Still working on details for the 3rd O/S trip next year.

Some gentle northerly current and wind managed to bring in a little bit of dirtier water on Sunday with viz dropping to 12 metres on the HMAS BRISBANE.

However before that we had 20+ metres viz. With the Southwesterlies and westerlies we’ve had these past couple of days, it should clear up nicely for the rest of the week and the weekend.

The Gneerings and Mudjimba Island had a good 15 metres viz both Saturday and Sunday last.
Our divers sighted a Grey Nurse at Fairyland at the Inner Gneerings which was a buzz for all. Water temp is holding at 19C in most areas with a little fluctuation up to 20C and down to 18C depending on ocean currents.
Dive conditions are looking great for the weekend with virtually no swell at all and only light southwesterlies. 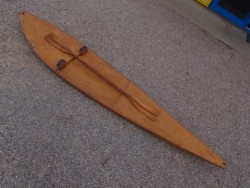 This fully restored 11'6" marine plywood ski was originally built in 1970.
It was modelled after the famous Prot-Craft 1948 surf ski..It has been recently restored by a master craftsman and along with the silky oak paddle is for sale.
It is ready for the water or as a collecter's item and would serve either roll very well.

This ski was used to reach local reefs such as the Gneering Shoals, Mudjimba Island, Cook Island and Palm Beach and Kirra Reefs etc. for free diving and a little spearfishing.